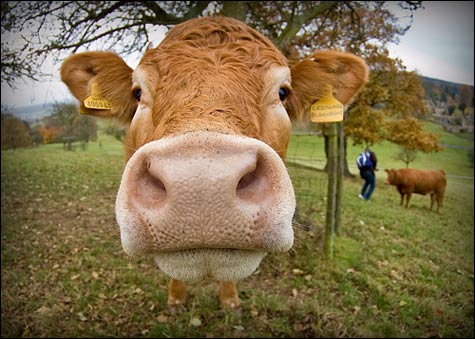 Sure, the title’s a little crude, but if I had to stop everything and give you the one piece of advice that could carry you from pre-conception to the grave, that would be it.

This isn’t just Daddy and Mommy advice.  This, figuratively (and literally at times) covers every facet of your life.  Work, play, rearing—good times, not so good times… in everything you do, there is a little crap you have to go through or get covered in.  It makes you stronger, better, and, if it happens enough times, faster.

My first exposure to this concept was facilitated by an unlikely mentor.  A retarded calf.  I know, WTH, right?

I was raised on a farm in Oklahoma.  The irony is that we weren’t farmers.  My parents wanted some land they could mess around on and they happened across an 80 acre plot with an old house that was to be foreclosed on, so they scooped it up. For years they raised various critters from cows to horses, exotic birds to coon dogs.  Part of my ‘chores’ was to help feed them.  Most of the animals were normal.  Then came this calf.

Now, I mentioned that we weren’t farmers, remember?  So picture an awkward, six foot, 170lb early teen walking around, feeding chickens and cows in a tank top, shorts, and knee high rubber boots (I still hadn’t caught on the whole sh!& washing thing and the flip flops I normally wore only lent to getting my feet in it.)  I heard some commotion from the back barn as I made my rounds.  I was headed that direction anyway, so I investigated.

Inside, my mother was trying to bottle feed a calf because it was, well, retarded, and wouldn’t nurse.  She was having some difficulty getting it to take the bottle and it kept trying to lie down.  She needed to coax it to swallow by rubbing its throat, so she yelled at me to help hold its ass end up and still.  The calf was huge for a newborn and clumsy.  If we had a video camera at the time, we’d have been ten thousand dollars richer and Tom (Bob at the time) would’ve been spewing a slew of corny jokes.

So there we were, playing our parts in this circus of errors, when the calf decided he didn’t want his behind help up any longer.  He then proceeded to do what most animals do when they are left with no other choice—he shat down my leg… my bare leg… into my boot… where my bare foot was snugly nestled.  I freaked, let go of the calf, it jerked, milk went everywhere, my mother cursed, I cursed… then it came out—“Get ahold of it!  SH!& WASHES!!!”  I was pissed (well, you know what I mean) but I held up the 100+ lbs of dead weight while it ate, with crap running down my leg—brooding.

As it turns out, that would not be my last time getting ‘crapped on’.  Since that fateful moment, I have been blessed with being covered in vomit, urine, more crap, blood, sweat, tears, and who knows what else.  And that was from friends.  My kids have been a whole other story.

Do I regret any of it?  Absolutely not.  But, no matter what situation I find myself in, I can always hear those words ringing true in my mind.  I no longer fear what I may end up covered in, because I know it washes.  Once you get that, a whole new world of fun and experience opens up before you.