You are here: Home / Brandon / The epic battle: Brawn vs. Girl Cooties… 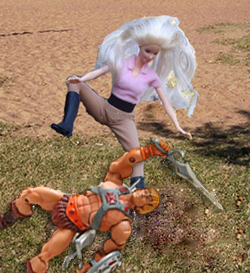 If you’re a guy and you have to toy shop for a little girl, I feel for you.

Poor things—traversing the crowd at your local ‘buy it all in one place’ store, doing your best ‘I’m so into this’ face. Once you hit the aisle, you start to look around—as if the manhood fairy is lurking around the corner with a pair of pliers and a quarter in hand.

God forbid you have a question. You aren’t going to ask a store clerk, now are you? Of course not, they immediately get on the intercom system and announce your presence, drawing the attention of national news crews waiting to plaster your face on the television and internet channels. You dry wash your hands as your body temperature rises. Paranoia strikes, causing you to throw sideways glances at the mothers and children shopping near you. Other males, also helplessly trapped in the area, avoid eye contact as if you were standing next to each other at the urinal (this is foreshadowing, ladies… we will discuss this later).

Soon it becomes too much. You begin to inch your way opposite the Barbies into the boys section. Your stress level lowers a little. Your short-term memory conveniently begins to purge all evidence of the traumatic sequence. Hulking muscles and robotic body armor begins to chip away the horrific experience from a few moments ago.

Childlike excitement builds as you reminisce of younger days when Storm Troopers were cast aside by the half dozen at the ‘dat-dat-dat’ sounds of GI Joe’s rifles. Then, He-Man comes charging in with his half of the Power Sword, ridding your little piece of Eternia from evil doers forever.

Those were good times. Indeed they were.

I’m about to wreck it all for you.

“You were playing with dolls.”

I know what you are going to say. ‘NO! They were action figures!’ Nope. Look it up. Dictionary says they’re dolls.

Please keep in mind that I told you this, not to shatter the crystal pedestal that your male role models built for you to stand on, safely out of reach from the evil girl cooties, but because I love kids. Kids that suffer from ‘oh, uh, yeah… they were all out of Strawberry Shortcake… thingies…’ knowing damn good and well they had just gotten the shipment in last night and you never made it past the Hot Wheels…

I’m sorry, I really am. But those cute, innocent (yeah, right), little girls are going to love you with everything they have after you present them with the spoils of your bravery in the aisle. Eyes will light up, big cheesy grins will permeate the testosterone, and before you know it, the cooties won’t seem so deadly anymore.

Oh, and by the way, if you are worried about it, the mushy feeling won’t last too long. You still have to get the thing out of the box for her. Good luck. It would be easier freeing yourself from Alcatraz.

Original Barbie and He-Man images used under Creative Commons Guidelines and were retrieved from https://thegirlrevolution.com/barbie-kicks-bratz-ass/ and https://www.flickr.com/photos/67896537@N00/4410596684/ respectively. Image as shown has been digitally altered.